Washington, D.C., February 16, 2021 — On Sunday, Egyptian State Security forces launched a campaign of retaliatory aggression against the family members of Mohamed Soltan in reprisal for his human rights advocacy, his support of the newly formed congressional Egypt Human Rights Caucus, and his ongoing federal lawsuit filed under the Torture Victims Protection Act (TVPA).

In the early hours of February 14, 2021, plain-clothed State Security officers raided the homes of six family members of Egyptian-American human rights defender Mohamed Soltan. The family had been previously targeted by the Egyptian regime in retaliation for Soltan’s human rights work and his involvement in a U.S. federal lawsuit citing the TVPA. Two apolitical cousins, Moustafa and Khairi Soltan were arbitrarily detained and are currently being held in the State Security prison in Shibeen El-Koum, Mounifyia. Ahead of the arrests, Egyptian officials and state-run Arabic and English language media outlets had launched a systematic defamation campaign against Soltan for supporting the congressional Egypt Human Rights Caucus, which was launched in January.

Soltan’s lawyer, Eric Lewis stated, “Mohamed Soltan is calling attention to the impunity and disregard for human rights under the current Egyptian regime. Now the Egyptian regime is arresting his relatives to try to intimidate him into silence. Such tactics have no place in the international community. Egypt cannot seek the benefits of membership in that community while denigrating human rights and behaving with impunity and lawlessness.”

This consistent pattern of acts of intimidation and harassment directed against individuals in the U.S. is not limited to Soltan and his family. Most recently, at least three family members of Aly Mahdy, an Egyptian activist who was granted asylum in the U.S., were arrested after his public calls to celebrate the tenth anniversary of the January 25 revolution. The Freedom Initiative has documented at least seven other cases of individuals in the U.S. whose families have been victims of the regime’s hostage-taking policy.

The arrests are part of an intensified campaign of transnational repression by the Egyptian military regime designed to silence critics outside Egypt. The timing of these arrests signals a clear challenge to a case that President Joe Biden championed during his election campaign and to the new administration’s stated commitment to elevate human rights to the forefront of its foreign policy.

On February 14, 2021, at approximately 2 a.m. local time, plain-clothed Egyptian security forces raided five homes of relatives of Mohamed Soltan in Mounofiya and Alexandria, Egypt. His cousins, Khairi Soltan, Moustafa Soltan and Ahmed Soltan were present at three of the houses. Moustafa and Khairi were immediately detained, while Ahmed was interrogated about his communications with Mohamed and ordered to turn himself in once the cast on his broken leg, an injury unrelated to the raids, was removed. Moustafa and Ahmed had previously been arrested and released in 2020. Three other homes were raided in Mounofiya and Alexandria and searched from top to bottom; relatives were interrogated and asked to communicate to three other cousins (who were not present but had previously been the subject of similar retaliatory actions) that they were wanted by state security.

This campaign of harassment and intimidation began on June 15, 2020, days after Soltan filed a TVPA complaint in District of Columbia federal court against former Egyptian Prime Minister and then-IMF Executive Board member Hazem el-Beblawi. As a direct result of his seeking to hold Beblawi accountable under a U.S. statute that provides a remedy for torture victims, Soltan’s family in Egypt was harassed and arrested in two separate raids by Egyptian security forces.

Soltan’s father, a former Egyptian official and legal U.S. permanent resident, disappeared from prison at the same time his five relatives were arrested. His whereabouts remain unknown. During the 2020 raids and arrests, security officers acknowledged that Soltan’s relatives would be held until Soltan dropped the suit and explicitly stated to family members that, if Soltan did not drop the lawsuit, more arrests would follow.

In response to Egypt’s retaliatory actions against Soltan for asserting his rights under U.S law, 21 international human rights organizations, then-candidate Joe Biden, members of Congress, the U.S. Department of State and the Egypt Working Group condemned the reprisals and demanded the release of Soltan’s family members. Additionally, Amnesty International published a report highlighting the Egyptian regime’s assault of the U.S. Judiciary with retaliatory actions against a U.S. citizen’s family.

In early November 2020, Soltan’s five cousins were released on bail, but remained charged with  spreading false information to shake the grandeur of the state, a charge widely deployed by the Egyptian regime to crush dissent. These trumped-up accusations are similar to those leveled against Mohamed when he was arbitrarily detained in Egypt. 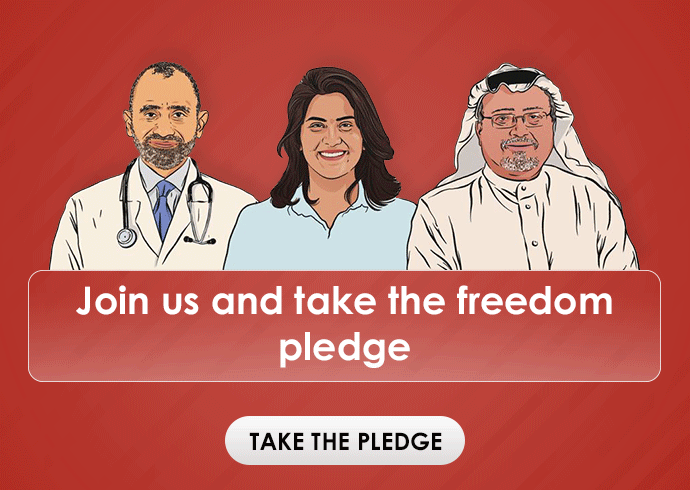