2020 © The Freedom Initiative, All rights reserved

(CNN)A 24-year-old Egyptian American medical student has been released after spending more than a year in an Egyptian prison and has returned home to the United States.

Mohamed Amashah was freed Sunday “after 486 days of arbitrary detention,” according to the Freedom Initiative, the human rights organization that advocated on his behalf. He landed back in the US on Monday and “returned home to Jersey City, New Jersey to be with his loved ones,” the organization said in a statement.

“The relief on the entire family’s face” when Amashah arrived at the airport “was priceless,” Mohamed Soltan, the president of the Freedom Initiative and a former Egyptian political prisoner, told CNN.

Amashah was arrested in Cairo last spring after protesting in Tahrir Square and displaying a sign that read, “Freedom for all prisoners.” He was charged with misusing social media and helping a terrorist group. Amashah went on a hunger strike in March 2020 to protest his imprisonment. It is unclear if he was still on the hunger strike at the time of his release.

The Freedom Initiative said Amashah’s “release is welcomed progress and a step forward in the right direction that we hope is built on for the release of other political prisoners in Egypt, including American citizens.”

“We at the Freedom Initiative, his family and friends are ecstatic about his release and return home and would like to extend our deepest appreciation to the members of Congress, civil society organizations, the State Department, the National Security Council and the Vice President’s office for championing Mohamed Amashah’s case,” they said in their statement Monday. 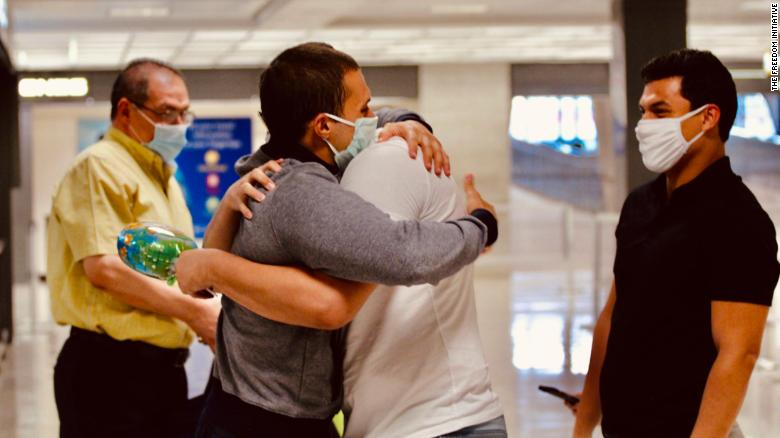 A State Department spokesperson told CNN that they “welcome the release of U.S. citizen Mohamed Amashah from Egyptian custody, and thank Egypt for its cooperation in his repatriation.”

CNN has reached out to the Egyptian government for comment on Amashah’s release.

Amashah’s return to the US follows that of fellow Egyptian American Reem Desouky, a Pennsylvania teacher who was released in May after 10 months of detention in an Egyptian prison.

Desouky told CNN she was not treated well when she arrived at the prison and did not have enough food. She recounted being depressed and anxious and rarely seeing her family — they limited their trips to the prison out of fear after her brother and cousin were arrested while visiting. Desouky said that as coronavirus began to spread, all visits to the prison were suspended.

Human rights organizations have condemned the Egyptian government’s crackdowns on dissidents and protesters, with Human Rights Watch declaring that “under President Abdel Fattah al-Sisi’s government, Egypt has been experiencing its worst human rights crisis in many decades.”

“Detention conditions are appalling and hundreds of prisoners, including political detainees, have died in detention from apparent insufficient medical care, including former president Mohamed Morsy,” the organization noted.

Other American citizens and permanent residents, including Khaled Hassan, Ola Al-Qaradawi and Hosam Khalaf, remain imprisoned in Egypt — their situation made all the more vulnerable by the coronavirus outbreak. In a late April call with Egyptian Foreign Minister Sameh Shoukry, Secretary of State Mike Pompeo “emphasized that detained U.S. citizens be kept safe and provided consular access during the COVID-19 pandemic,” according to a US readout.

In January, American Mustafa Kassem died of heart failure in the midst of a hunger strike after more than six years in an Egyptian prison.

“On June 15, two weeks after Mohamed Soltan filed a suit in U.S. federal court against his torturer, former Prime Minister Hazem El-Beblawy, armed members of Egyptian security forces raided the homes of Mohamed’s family members and arrested five of his cousins. The family was told they would be held unless Mohamed ‘dropped the case,'” Soltan’s lawyer Eric Lewis said in a statement on June 24. “That same night, unidentified policemen interrogated Mohamed’s father, Salah Soltan, in prison after which he disappeared.”

“The Egyptian government must immediately cease this brazen attempt to interfere in the U.S. judicial process,” Lewis said.